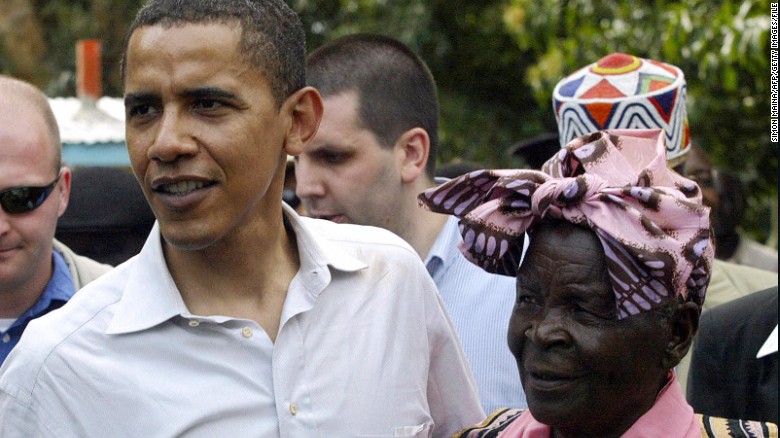 Sarah Obama, the grandmother to former US President Barack Obama, has died at the age 99yrs.

She was receiving treatment at a hospital in Kisumu at the time of her demise on Monday.

Although full details of what was ailing her have not been revealed, the family has refuted reports that she succumbed to COVID-19.

According to her daughter, Marsat Obama, Sarah had started ailing back in 2020, having suffered a stroke in September.

Sarah was the third wife to Obama’s grandfather.

Being a muslim, she was set to buried on the same day she died, but her family put in a request to have her burial delayed by one day, which was granted.

During her lifetime, Sarah was a distinguished philanthropist who took a special interest in educating girls and orphaned children.

Although she was a public figure in her community for many years, she first came into the media limelight in 2006, when Obama, then a US senator, visited her at her home in Kisumu.

In 2015, Obama returned to Kenya as President of the US, giving the world a better glimpse at his ancestral home and family, including his half sister, Auma Obama.

He visited her yet again in 2018 after his departure from office, although the visit was not as publicized as earlier ones.

“Just lost the most important person in my life – my gran, Mama Sarah. My heart is broken! But as I write, not able to stop the tears from pouring, I know I was blessed to have her for so long! My inspiration, my rock, my comfort zone, my safe space. Rest in peace Dani,” Auma tweeted shortly after Sarah’s demise.

Granny Sarah, as Obama fondly referred to the deceased in his memoirs, passed away aged 99.

“…We will miss her dearly, but celebrate with gratitude her long and remarkable life,” Obama wrote on social media on Monday afternoon.