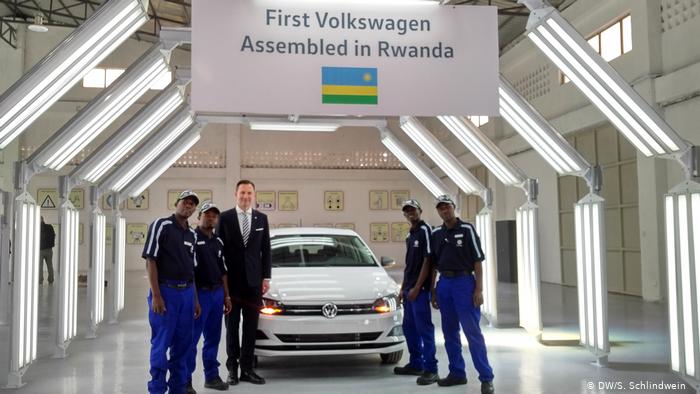 It’s been a year since one of the world’s biggest automotive companies, Volkswagen, bet on tiny and landlocked Rwanda as part of its expansion strategy in Africa.

Since the 1950s, the German automaker has assembled cars in South Africa, and later in Nigeria and Kenya. The carmaker’s renewed interest in Africa is driven by the demand for brand new cars propelled by an emerging middle class as well as competition from companies like Toyota, Nissan, and Peugeot who are ramping up production in the continent. In Rwanda, Volkswagen set up a $20 million operation expected to produce up to 5,000 vehicles a year and create about 1,000 jobs.

In Kigali, VW also placed a wager on another first for its global operations: ride-hailing services. The project is part of an initiative to use Rwanda to test the future potential of a fully-fledged ride-hailing service, says VW Rwanda chief executive Michaella Rugwizangoga.

Dubbed “Move,” the digital mobility concept entailed the company owning and managing the entire value chain: from supplying their own cars and drivers to providing insurance, refueling, and maintenance services. The venture was a first for Rwanda too, whose small, but fragmented, transportation system is yet to be disrupted—unlike those in larger East African cities—by app-based car-hailingand bus-sharing services.

The first package launched under the ride-hailing service last July was “Move Share,” giving companies like Bank of Kigali or bakery chain Brioche access to a fully-managed fleet service. As the capital grows steadily into a hub for conferences and exhibitions, hotels and event organizers have also rented the cars by paying a flat fee on top of usage per minute.

Following a pilot, VW also began offering riders on-demand hailing services around Kigali last October. With 14,000 downloads of the “Move Ride” app so far, the service has 30 cars driven in two shifts by 70 drivers, with the expectation of increasing to 100 cars in the coming months. The taxi-hailing business uses the VW Polo model while hotels and corporates use the larger Passat sedan model.

Rugwizangoga says they have had to adjust which models to deploy where over time because corporate clients “want a clear distinction in terms of brand positioning.”

Given how much cash is a favored method of payment among the region’s ride-hailing businesses like Uber and Bolt, Rugwizangoga says they are bullish about getting customers to pay with mobile money or credit cards.

As Rwanda experienced rapid growth, it has also positioned itself as a business and technology center; Move Rwanda’s app, for instance, was developed by local software firm Awesomity. VW says it wants to align with that national push for innovation and to eventually make their product cashless. “But we allowed cash because we understand the reality in the market and some customers will always pay cash.”

Yet even cracking a small, landlocked market like Rwanda’s can prove difficult. Getting materials to assemble the cars from the ports in Tanzania or Kenya sometimes takes long not to mention the costly transportation expenses. And even though regulators set up a sandbox framework allowing VW to experiment with a ride-hailing platform, Rugwizangoga says it’s hard making institutions understand how to tax assembly kits vis-ŕ-vis full products.

She also says they should have capitalized on the initial excitement around establishing the car-sharing service in July 2018 and launch the ride-hailing business instead of only aiming to secure large companies or groups.

To expand its offering, Volkswagen Rwanda says it will soon launch a children’s pick-and-drop service (Move Kids) as part of its ride-hailing service. They will also establish a service dubbed “Move Drive” that allows customers to rent a car and return it to one of six to 10 stations of choice in Kigali. The package could eventually allow locals and travelers to drive outside Kigali to tourist hotspots like Lake Kivu. The carmaker will also introduce 50 electric cars in its ride-hailing business as part of a broader shift towards getting rid of gas-powered vehicles.

Rugwizangoga hopes these moves will help satisfy the local demand, target more riders and companies, and hopefully help replicate the model elsewhere. “When you allow people to be mobile, you unlock their potential.”